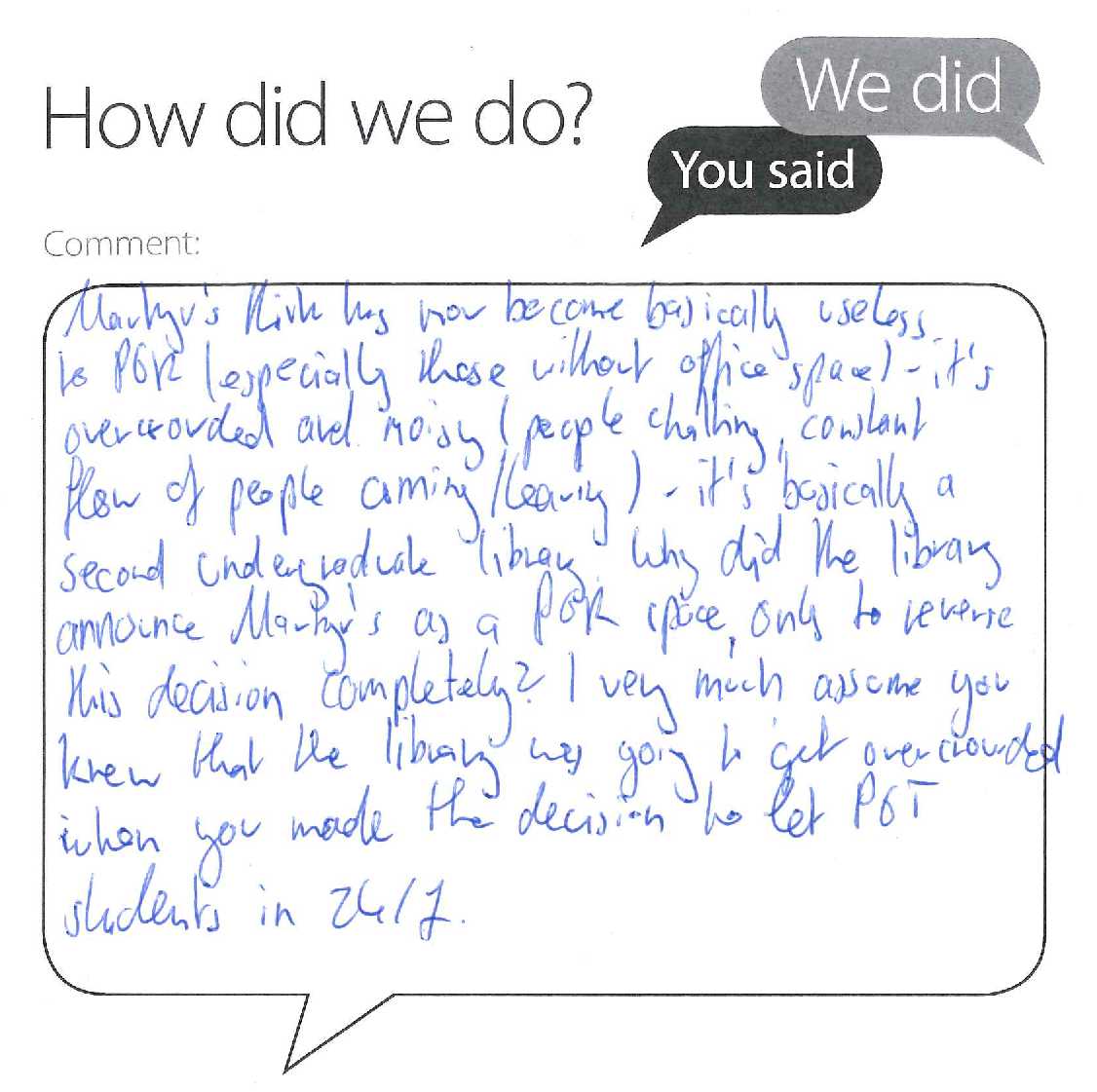 Thanks for your feedback.

I would agree that Martyrs' Thomson Reading Room has become busier this semester due to our decision to try letting all postgraduates in on an equal basis until Christmas, at which point we will review matters.

We opened Martyrs in 2013 and were asked by the Principal's Office to run it as a staff and research student only facility.  Relatively quickly two things became apparent.  Firstly, the reading room was rarely busy and often had very few users in it, even during the day.  Secondly, there was growing demand from taught postgraduates to have better access to Martyrs.  Pressure on Library space elsewhere is significant and it was difficult to justify excluding PGTs from a space that was evidently under-used by PGRs and staff.

In early 2015 we reached a compromise and opened Martyrs up on a partial basis to PGTs - i.e. access after 5pm during the week and all day at weekends.  This approach was successful to an extent in that occupancy in the evenings and weekends was greater but it was a contentious policy.  Masters students felt aggrieved that they were being treated less well than research students and some research students felt that Martyrs should be for their own exclusive use.  Library staff are of course in the position of trying to do their best to provide services to everyone.

In conjunction with the Principal's Office and Students' Association we agreed to try for the first time since we opened the facility 4 years ago to treat all PG students equally.  There's no question that the building is busier and you are correct - we anticipated that it may become overcrowded but the point is that we wouldn't know for sure that this would happen until we tried it.

We will be keeping the arrangement as it is until the Christmas vacation and will review the matter then.  I am sympathetic to your frustrations but I'm afraid the Library is not responsible for the lack of office space in academic schools for PGRs and Martyrs was never intended to compensate in this respect.

If we were to revert to the previous arrangement, we would essentially have a Library facility half empty for large periods of time and this is difficult to justify when there is clear demand for access from PGTs.

If you have suggestions as to how we can improve matters for all postgraduate students, please do get back in touch.